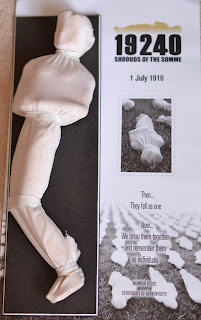 We had a few items related to the WW1 Centenary appear this month.Sally brought along one of the shrouds created by Rob Heard in commemoration of the 72,396 Commonwealth soldiers killed at the Somme with no known grave.They are currently on display in Queen Elizabeth  Olympic Park in London.There have been  small  exhibitions around the UK over the past four years, most recently at Bristol Aerospace Museum.It was a mammoth undertaking by the artist and gives a very graphic idea of the carnage visited upon one  nation at one battle. 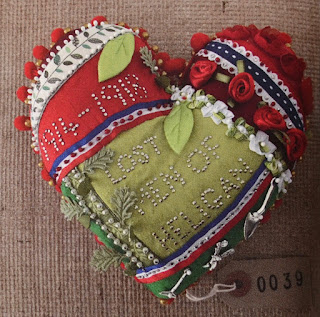 Liz brought along the book and  catalogue of the 1,568 Sawdust Hearts exhibition initiated   by Helen Birmingham.The heart above, number 39 ,was created by Liz to honour the lost soldiers from Heligan Garden in Cornwall. 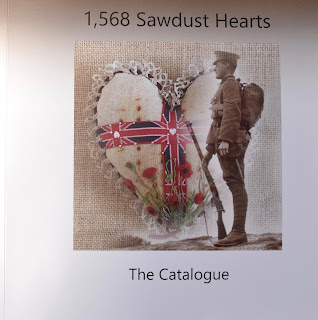 Queen Mary originally instigated Sweetheart Pincushions at the end of WW1,which were pinned by soldiers as part of their convalescence. The exhibition of the new hearts will be on display in Woodend in Scarborough 3-30th November. Funds raised will go towards Combat Stress the veterans mental health charity.
Posted by Gordano Textile Artists at 07:20