Marilyn's weavers are taking part in  producing another calendar .They had a very successful one last year which was reprinted as it did so well.
The inspiration is a sea slater ,apparently a woodlouse but one that lives under water.She wasn't too taken with the colours as they were drab and grey,so did something on the computer to enliven them.She has to have 20 samples completed by the end of January.This is her sampling so far,using pens to colour the yarns just to try out the background colours.

Carol had taken part in an Annette Emms workshop. 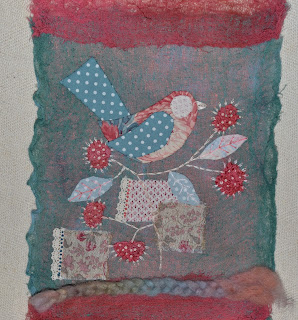 They used wool blanket as a base and lightly embellished scrim on top .The rest was appliquéd and stitched adding lace .Carol wasn't too happy with the braided wool tops.We didn't think it added anything to the piece. 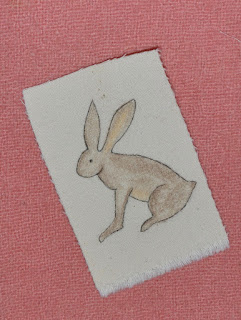 This little hare was created by laying bondaweb between two layers of calico.It stiffens the base which can then be drawn into. 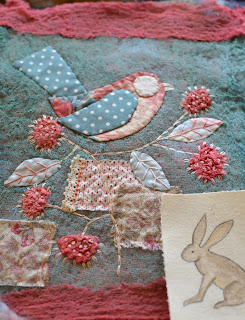 This is a delightful piece which would work in a frame,or be put to use on a special cushion,bag or book wrap.Carol has made this technique her own.

Posted by Gordano Textile Artists at 08:28