With the build up to Christmas and New Year routines become more difficult to adhere to .So,with another meeting fast approaching ,the blog needs to be brought up to date.There are a number of items which have not been blogged about ,so apologies if they all come in one fell swoop! 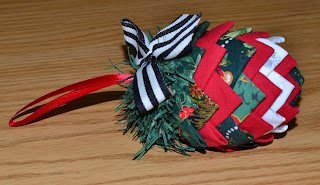 Debby brought an ornament made at Tyntesfield and called pinwork.
She had also unearthed a "round robin" quilting piece that had started life as a piece of 'ugly grey felt.She thought it didn't particularly work so we gave her suggestions of cut it up and reassemble,put it in the washing machine and to burn back some of the areas covered with the organza to reveal the underlying areas . 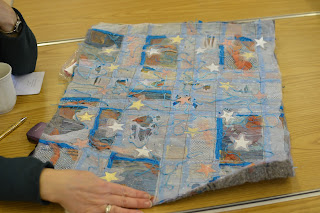 Sally had framed some of her 'found' assemblages.There were several opinions about this,some thought they were better as she had them previously ,others thought they looked better in threes.That's it with GTA but whatever the artist listens and goes away to make up their own mind. 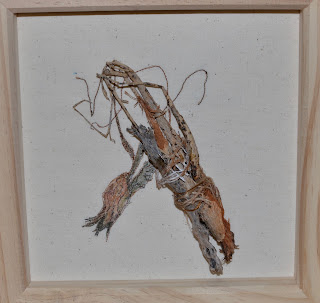 Jenn had seen the idea of decorating tags on Designmatters for Christmas and had shared it .Sally true to form,brought a piece she had done in 2007 of Cranes in Spain. 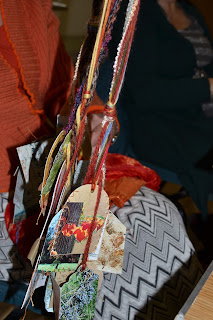 Created on tags and hung from handmade tassels 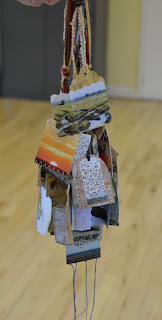 Viv had been thinking ahead to Nature in Art in October this year.
Put the date in your diaries OCTOBER 3-15TH
We will be linking at least some of our work to a piece in the collection.Viv has chosen a piece by Alardus  vanden Bosch. 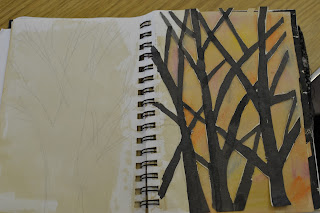 it uses trees as its inspiration and Viv plans to work with velvet and discharge like this piece below which she did with plastic doilies! 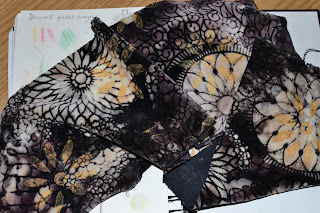 Sue enjoys working with the embellisher ,fibres of all kinds and COLOUR. 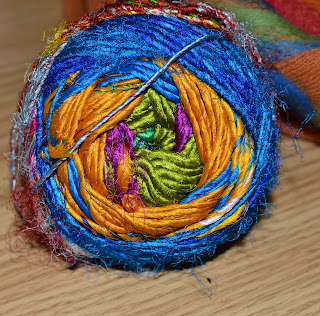 This was a purchase at the west Country show in November,a luscious ball of sari silk.
Below is a piece she is working on,adding to with her variety of fibres. 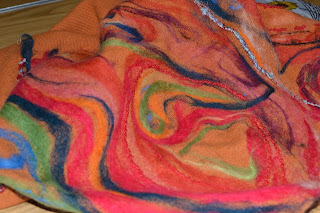 Ira had been away in Wales and had picked up this beautiful rock on one of the beaches she visits regularly.She draws wonderfully,and was looking to work from realism into abstraction.These are some of her preliminary observation drawings. 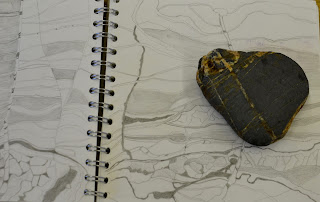 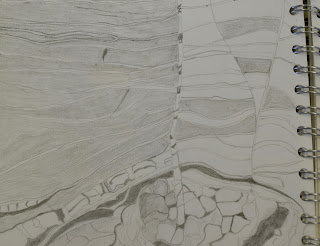 saying she has done none since last May 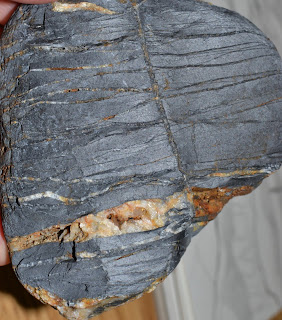 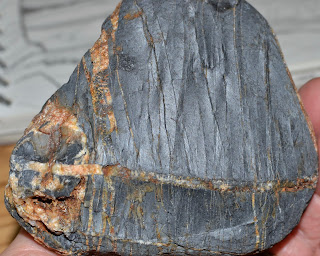 Kirsten couldn't come without some felt ,this one is hollow.she'slooking forward to a workshop with Gladys Paulus this year . 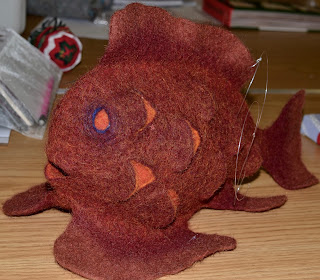 These were from a workshop learning how to dye aluminium sheet and then using to create jewellery pieces. 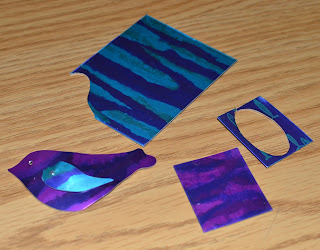 This stunning quilt  is one she's sitting and hand piecing while sitting in the evenings.It looks like a kaleidoscope! 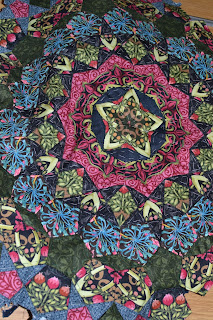 Marilyn has to work with fibres but this time it was knitting but not just any knitting ..... 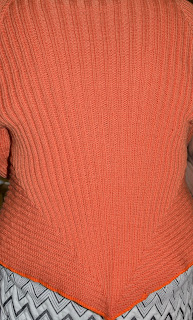 this is knitted all in one piece! 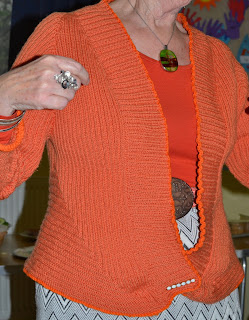 and currently on her needles a PAIR of socks. 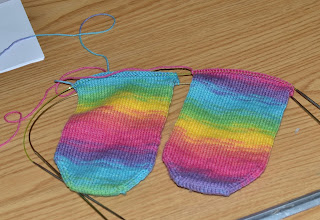 Liz brought a quilt based on rust marks in the landscape .It was to do with SAQA 'Made in Europe' and destined for a competition in USA. 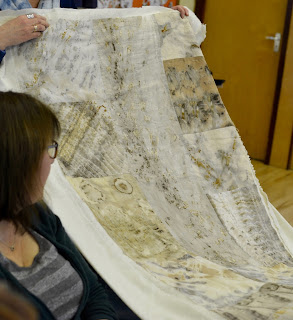 She had done a lot of workshops just recently ,among them this collgraph course. 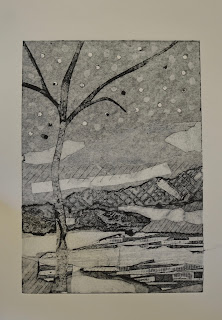 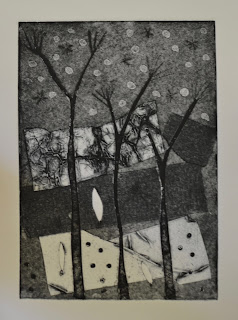 This is the plate for the top print. 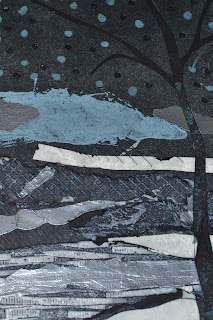 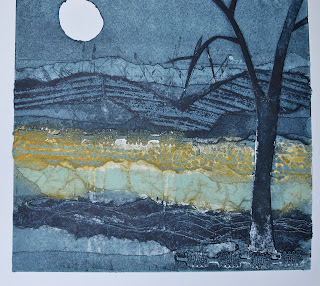 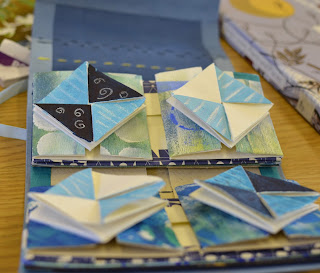 She had also been on a workshop for the Chinese thread book inside above ,cover below. 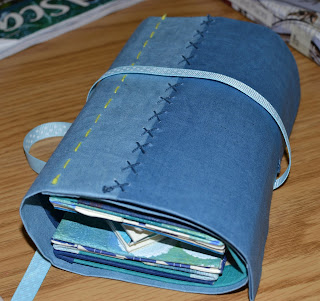 Jenn had continued with her seed pods.She had been having fun with a session on her Gelli plate looking at the patterns within.She printed into an A6 sketch book and has begun to add in collage and further marks. 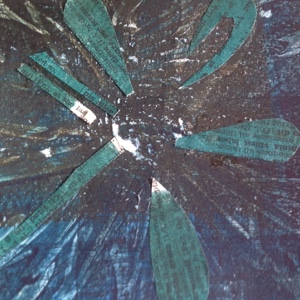 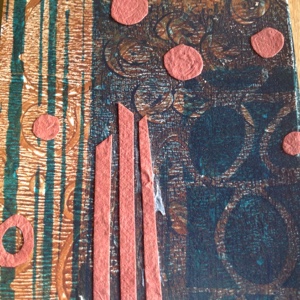 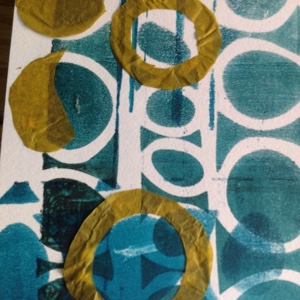 Posted by Gordano Textile Artists at 04:55