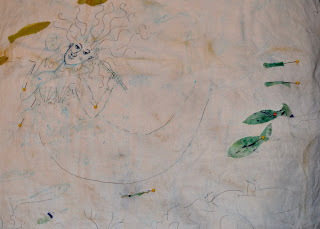 Debby had been to Barcelona for a little break and had been inspired by Gaudi. It set her thinking again about scales and mermaids and mermen ,fish and blue and white tiles.These were her focus when visiting Newark.So she has gone back and started two pieces based on these ideas.The photos were difficult to take as it was a dull day and the pieces were in the drawing stage.She starts with the face as it needs to be right to set the tone for the rest.The first is the mermaid with swirling hair and the fish. 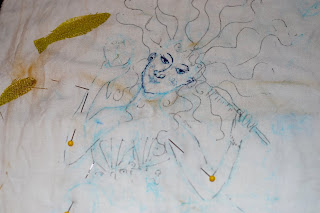 The second has been converted to black and white to make it easier to see.This is the merman riding a seahorse .Debby had pinned some chiffon to the pieces ,the dark swirls, which will be stitched to incorporate.If you follow her on Instagram you will see she has already continued and made a lot of progress. 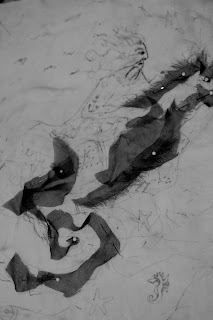 Sue had initially thought to do something with the chicken who roam around the tea garden in Newark.However,once on a recent visit she lost her heart to Spike ,the dragon . 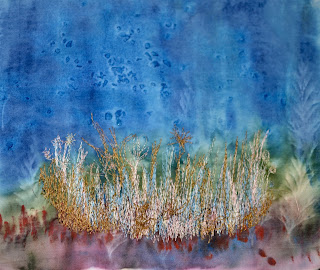 She had been playing with placements and stitching some rudimentary ideas . 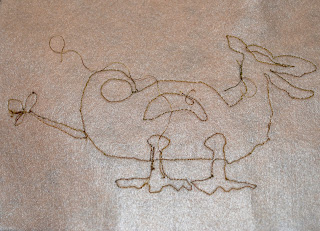 She also had cut out some playful dragons ,thinking she might have them running in and about a gateway. 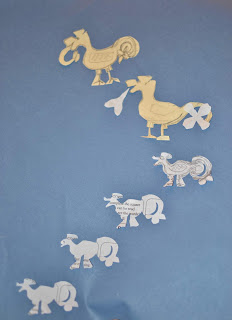 She also brought along some old samples from her City and Guild days.We thought this gold work sample deserved to be framed and bought out into the light. 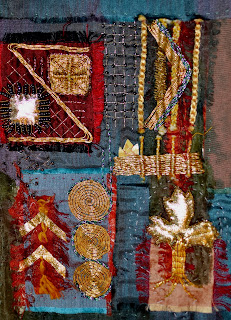 She had used leaves to create a stencil for screen printing for this sample ,then used discharge paste to print .It makes for a really rich fabric. 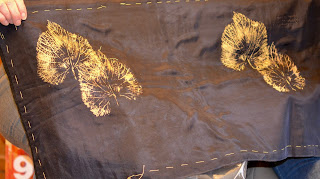 Posted by Gordano Textile Artists at 04:57