After our day on Tuesday making the packs I  looked out some I bought during our Somerset Arts Week last May.I have taken them out several times and thought how lovely they were ,only to put them away again.Deryll had mentioned the idea of using a pack each to show what they could be used for.I probably should have been doing something else but this was more tempting. 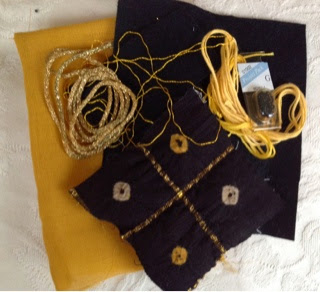 My pack contained,some black felt,some plain yellow fabric,a black and gold tie- dye fabric,tiny black beads and some threads.See photo above.
I decided to add some wadding,scrim for backing ,black cord and two large beads.
I backed the black fabric with wadding and scrim and used the black sewing cotton to quilt it along the grid lines.Some of the tie-dye shapes were outlined in running stitch with the shiny gold thread
Next I cut the fabric into a large piece and two smaller pieces.The large one was made into a bag,lined with some of the yellow fabric.the smaller pieces were lined with felt and made into a scissors keeper and a needle case.I used the tiny black beads as accents on all three items. 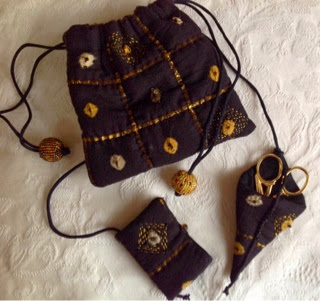 I used the cord to make drawstrings for the bag closure and to attach the needle case and scissors keeper to the bag.The large beads ,found for pence in Oxfam,were used as cord ends.
The top picture actually shows what is left after making the items.The bag is large enough to hold the two smaller items and still have room for additional threads.
A very satisfying little project for the princely sum of £3.00 ,plus added extras from my stash.
Posted by Gordano Textile Artists at 10:29